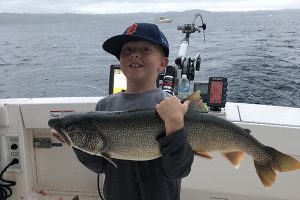 Before the introduction of salmon and other non-native trout, the lake trout was the undisputed king of these waters. Although there are now pretenders to the throne, this former alpha maintains his place as one of the most exciting fish to catch in Grand Traverse Bay. Hiding in the cooler waters found deep within the bay, the lake trout will not yield to amateur techniques. Captain Adam is well experienced in the behavior of this regal fish and has the knowledge and the equipment to help you bring him to the surface.

Lake trout are a native species of fish in the Great Lakes. To tell the native lake trout apart from the lake planted trout they remove the adipose fin, which indicates that a coded-wire tag was implanted into the snout. These tags are then used to figure out the age and stocking location of the catch. 98% of the trout that is caught are fin clipped. The old adage about lake trout is that they grow a pound a year, so the bigger the fish, the older it will be. Lake trout don’t travel a lot, approximately 150 miles in their lifetime. They are not fast growing fish, but tend to be very aggressive. Their aggressiveness can be seen by teeth marks on their back which tend to be from other fish who have grabbed them.

Lake trout normally have a white and greasy meat, but that has since changed for some lake trout. This is due to the invasive gobies that are located in the Great Lakes. Gobies are full of nutrients, which have since turned the meat of a lake trout into an orange color like a salmon, and have also made it a stronger meat. Planted fish do have eggs, but we have no idea if they reproduce or not. Native lake trout tend to be darker and their fins are a deep orange color, whereas planted can sometimes be a silver shade.

Many lake trout can be found at different temperatures of water, from 40-70 degrees. This depends on where the bait is located in different waters and the time of year. The best time of the season to fish for lake trout is the middle of May to June, and the season picks back up in August when the salmon move in. The season stops from October 31st to January 31st. To catch trout in early spring, you want to be in water 25-55 feet deep. This is because it’s warmer near the surface at this time. Over the years water 80-100 feet deep works best. This is because the lake trout tend to be “bottom fish”, lounging on the bottom instead of swimming around. They aren’t as aggressive if they just lay on the bottom.

There are many great ways to cook trout as Mega-Bite Fishing Charters suggests. One of the best ways is to take the fillet and put whatever seasonings you’d like on it, then put it meat side down on the grill. You want to sear it for 2-3 minutes and then flip it back over to sear on the side with the skin. After it’s flipped, make three slits into the meat, put lemon butter in those slits and cook for 5-10 minutes. Another great way is to poach it. Using aluminum foil, put in some water, vegetables, and the meat, then seal it up and put it on the grill. Some even suggest putting an Italian dressing marinade on the fish before putting it in the foil on the grill.

To learn more about our fishing charter services, please contact us.